The Oldest Golf
Course in The World 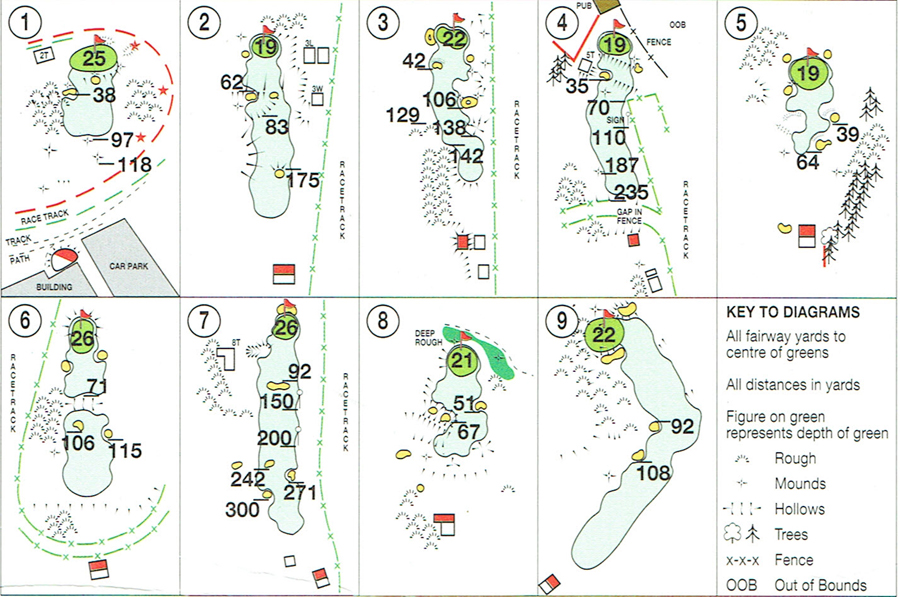 Guide To Playing The Course

1st
This used to be old last hole, hence the name “Home Hole”.

A tough start off the back Tee, 240 yards from tee to green with a steep incline leading up to the green which is guarded by two deep bunkers. Any putt from the front right quadrant is tricky as it is an uphill, swinging putt that awaits you.

2nd
The second hole is Graves, because it is believed to be the burial ground for soldiers who died at the Battle of Pinkie Cleugh between the armies of Scotland and England in 1547.

3rd
You face a very intimidating Tee shot, especially from the white tee. Only the exceptionally long hitters can afford to go up the left as a plantation of gorse bushes runs alongside that side of the fairway, so you need to be accurate off the tee. The bail out shot is right, but you will find yourself playing from the racetrack and have a difficult approach shot as you need to carry a deep bunker that protects the green.

4th
The hardest hold on the course off the white tees as it’s a 200-yard carry to clear the racetrack. If you go too far right the long grass of the racetrack makes it very difficult to reach the green but to the left of the fairway, gorse bushes await an errant tee shot. So, try to get your ball down the left-hand side of the fairway to give you the best angle into the green. If you are playing into the wind, it will be a long iron or wood you require to reach the green and even then, there is an undulating, uphill approach you must negotiate, but beware you don’t hit it too far as you could be OB if you do. Once your ball is on the green you could face a difficult putt and three putts are common on this green. Do not be too disappointed with a bogie on this hole.

5th
The shortest hole on the course, many years ago the Firth of Forth was held back by a seawall which ran behind this green. It is a tricky hole as the prevailing wind blows left to right and you need your shot to miss the deep bunker that protects the front left of the green. The green slopes downhill from the right-hand side so the middle-left of the green is the place for your tee shot to finish. There are two other bunkers which you cannot see from the tee, another deep one is hidden behind the bunker you can see from the tee and a shallower bunker lies at the back of the green.

6th
This hole usually plays into the wind but if you hit a decent drive, it should only be a short iron to reach the green. Unless you are a big hitter do not attempt to get your ball over the ditch that runs across the fairway as you can end up on the downslope or up-slope and face a tricky pitch. The green is on two levels so try to get your ball on the right one. If the hole is on the lower level do not be too aggressive as short is better than long. If the hole is on the top level and your approach does not get up the slope, you’ll probably face a long swinging uphill putt, and three 3 putts are commonplace.​

7th
The longest hole on the course, a Par 5 from the white tee but a Par 4 from the yellow tee and there are less than 10 yards between the two tees. If you avoid the three fairway bunkers with your drive, you can either lay up short of the fairway bunker 100 yards before the green or attempt to carry this bunker and give yourself a short chip shot or even a putt for an Eagle. It is a long green with many undulations so try to get your approach to within 10 yards of the hole to avoid a three putt.

8th
The last of the Par 3’s and it’s a long one, 240 yards and normally into the wind. It is important to miss the two bunkers on the left of the fairway as you could end up dropping two or more shots, as it is hard to reach the green from there. There aren’t many 2’s on this hole, which is often mistaken as a Par 4.